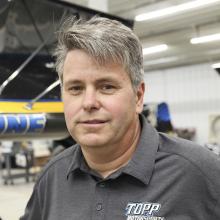 Mark Shambarger started his racing career with Gaerte Engines in Rochester, Indiana in 1984 with sprint cars on dirt tracks. He later moved to Indianapolis where he achieved great success with teams such as Hemelgarn, Patrick, Newman Haas and Bryan Herta Autosport. Mark’s career highlights include the 1996 Indianapolis 500 win as chief mechanic for Buddy Lazier and the 2011 Indianapolis 500 win as a crew member for the late Dan Wheldon. Mark was also awarded the Clint Brawner Award in 2014, which recognizes an Indy 500 chief mechanic who "exemplifies the mechanical and scientific creativity, ingenuity, perseverance, dedication, enthusiasm and expertise" of its legendary namesake, Clint Brawner. Mark is now proud to once again call Rochester home. As Crew Chief for TOPP Motorsports, he is back where it all began, racing sprint cars on dirt tracks.

Justin Grant is coming off of a stellar 2017 season, finishing second in USAC National Sprint points by a mere six points and receiving various honors for his versatility and performance. He was recently announced as the winner of the Prosource Fast Time Award Challenge for earning fast qualifier eight different times in 2017.    Additionally, Grant was the only driver in 2017 to start all USAC National point races – Silver Crown, Midgets and Sprints – and was one of only two drivers across all divisions to win feature events in each division. It was recently announced that Grant’s consistency in performance across the three National USAC divisions has earned him the coveted Mike Curb “Super License” and a $5,000 award.